Formal education in most of its forms is still struggling to effectively harness digital technology to enhance and transform learning and teaching. Even with a history for 40+ years of various attempts. The reasons for this are numerous and diverse. The following is an attempt to look at one of the reasons. A reason, at least to me, which seems to have be somewhat ignored.

The following is a first attempt to frame some thinking that is moving towards a presentation I’ll be giving in a couple of weeks.  This is only the first step, there’ll be follow up posts over the coming week or two. These posts will aim to develop my own understanding of a model that aims to capture the nature of pervasive digital technology. It’s a model that will draw largely on the work of Yoo, Boland, Lyytinen, and Majchrzak (2012) combined with a few others (e.g. Papert, 1980; Kay, 1984; Mishra & Koehler, 2006). That model will then be used to look at current attempts within formal education to use digital technology for learning and teaching.

represents the common, received wisdom about what technology is and means. Technology, from this view is the engineered artifact, expected to do what its designers intend it to do. (p. 123)

They go onto cite work by Kling and Latour to describe this view and its’ limitations before going on to examine 4 other views of the IT artifact. The motivation for their work is that “The IT artifact itself tends to disappear from view, be taken for granted, or is presumed to be unproblematic once it is build and installed” (Orlikowski & Iacono, 2001 p. 121). They go proceed to describe 4 additional “broad metacategories” of the IT artifact “each representing a common set of assumptions about and treatments of information technology in IS research” (Orlikowski & Iacono, 2001 p. 123). Metacategories or views of technology that draw on a range of perspectives outside of their discipline such as Actor-Network Theory etc.

Yoo, Boland, Lyytinen, and Majchrzak (2012) argue that the “fundamental properties of digital technology are reprogrammability and data homogenization” (p. 1398)

Whether a digital technology is allowing you to talk to friends via Skype (or smartphone or…); capture images of snow monkeys; listen to Charlie Parker; measure the temperature; analyse the the social interactions in a discussion forum; or, put your students to sleep as you read from your powerpoint slides (which they’re viewing via some lecture capture system) all of the data is represented as a combination of 0s and 1s. All the data is digital. Since all digital technologies deal with 0s and 1s, in theory at least, all digital technologies can handle all data.The content has been separated from the medium (Yoo, Henfridsson & Lyytinen, 2010).

Analog technologies, on the other hand, have a tight coupling between content and medium. If you had bought “Born in the USA” on a record, to play it on your Walkman you had to record it onto a cassette tape. Adding it as background to that video you recorded with your video camera involves another translation of the content from one medium to another.

Data homogenization is the primary reason why you – as per the standard meme – can now carry all of the following in your pocket. 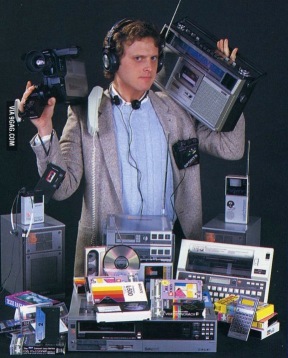 Where is the convergence?

If data homogenisation is a fundamental property of digital technology, then why isn’t there more convergence within formal education’s digital technologies? Why is the information necessary for learning and teaching kept siloed in different systems?

When I’m answering a student question in the LMS, why do I need to spend 20 minutes heading out into the horrendous Peoplesoft web-interface to find out in which state of Australia the student is based?

What is gained and/or lost by ignoring a fundamental property of digital technology?

6 thoughts on “What is the nature of digital technology? Part 1”